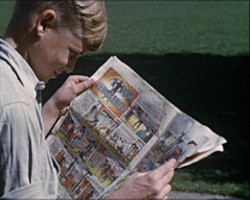 An amateur film produced by the Surrey Fire Brigade Film Unit. The film includes scenes of a dignitary visiting a fire station to inspect the fireman. The main focus of the film is on the Fire Defence Exhibition at Bentalls department store with numerous shots of the displays and exhibits in the main hall.