Scenes of home and family life, through amateur films, home movies, documentaries and drama form a major part of the archive's collections. Such material includes amateur footage of family events such as Christmas celebrations, weddings, holidays in the UK and abroad, family outings, and leisure time activities, as well as fictional representations of domestic life and relationships are filmed.

Screen Archive South East houses a great deal of amateur family film footage mostly spanning the 1920s to the 1970s. Home movies made by cine-camera owners of their own home and family events include images of a wide range of subjects including everyday domestic life, scenes and events from the local area, and holidays and trips around the UK and abroad.

One example of a rich and fascinating amateur film collection held at Screen Archive South East is the films of Joseph Emberton, a Surrey-based architect who filmed his family and travels from the 1930s to the 1950s. In these films scenes of children at play, every day home life, and seaside outings sit alongside footage of pre-war Germany and travels to Morocco.

Other important amateur collections in the archive include the Gowlland family films which span the 1930s to the 1960s, following the children as they grow into adulthood and have children of their own. The collection of amateur films by Enid Briggs of Broadstairs shows family activities and outings as well as local scenes and events, such as Town and Family Scenes at Broadstairs (1929 - 1938), providing a unique record of life in the region in the 1920s and 1930s.

In this very short film we see a table set for a wedding reception, with a wedding cake being cut. The bride and groom drive away in their car, while guests gather on the street to throw confetti as they leave Other street traffic is seen as they pull out of the driveway. The film is damaged and so the visual quality is poor.

A short film of a 1920s wedding. The film shows traffic in the road outside a church, bridesmaids arriving carrying flowers and the arrival of the bride. The bride and groom emerge from the church after the ceremony and leave in a car. The bridesmaids and guests pose on the steps of the church for the camera.

A short compilation showing a family group with a wheelbarrow in a domestic garden, playing together with the grass cuttings. Several older family members and a Labrador dog join in the game. 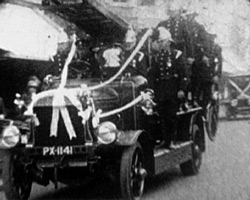 A short intertitled film showing scenes from a 'fireman's wedding' at an urban church. The newly weds are seen exiting the church under an arch of fire axes. The couple then leave in the decorated fire engine. 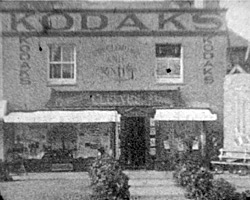 A series of short clips show a kitten in a flower pot in the garden; a motorbike with sidecar is driven around a bend on a rural road while a man lies flat on top; a series of fast titles for a Goodwood event; an exterior view of Edward Cleaves' Chemist/ Photography shop in Bognor Regis; and a portrait of a man (Edward Cleaves?) smoking a cigar.

Family scenes filmed in the gardens of Foxhunt Manor at Foxhunt Green in Waldron, East Sussex, in 1926, featuring portraits of family members and staff, including maids, farmhands and stablehands, smiling, laughing and talking.

Percy and Eleanor Grace Nightingale and friends perform a brief play in front of the camera in the garden of their Crawley home 'Nutmead'. The 'Hazeldene Orchestra', under the conductorship of its founder Moses Nightingale, celebrates his 70th birthday and its 50th anniversary with a musical performance in the garden of 'Hazeldene'. 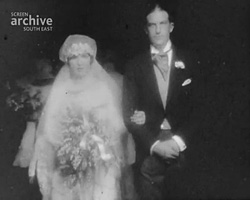