The Brighton Tigers last professional ice hockey match, played at S.S. Brighton against Paisley Mohawks. The film captures parts of the match, the spectators, the presentation and celebrations at the end of the match.

The Mayor of Hastings officiates at the opening of Torfield School, Hastings. Speeches are given to an assembled crowd before the school doors are officially unlocked and a plaque is unveiled inside to commemorate the opening.

A Brighton family play with their new toys at home and walk through town over Christmas, 1965. 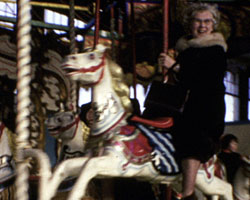