A short home movie featuring footage of family members in a public park and playing in a back garden. The film includes a short scene of a street in Edenbridge under flood water.

An amateur film of the severe flooding at Molesey in 1968 showing general scenes of the flood, including; people in rowing boats or wading through the streets, flooded houses, and the army and fire brigade helping flooded residents. 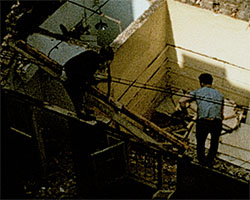 An amateur film capturing street scenes from Dartford town centre. A large building standing on a street corner is demolished and the site is cleared ready for redevelopment. A large Christmas tree is put up on the demolition site over the Christmas period.

A Bird in the Hand

Amateur fiction film about a man who falls asleep in the woods and dreams about a girl dancing with a balloon.