A silent film featuring the construction of a new building at the Pestalozzi Village, Sedlescombe. The children of the village are involved in the building work, mixing concrete, bricklaying and digging trenches. As the building work progresses, they are seen doing a variety of activities such as metalwork, farming, gardening and fencing.

Jubilee celebrations at Farncombe, Windsor and Godalming feature in this amateur film, accompanied by an intermittent soundtrack. At Farncombe, the parade moves along a residential street; at Windsor Great Park, large crowds are gathered to watch the parade; and at Godalming the town centre is decorated with bunting as the parade is seen marching through the streets.

An amateur film of the 1981 Horsham Festival. The film opens with the title: "Horsham Festival '81". Shots of the parade and the crowd gathered on Queen Street to watch. Bagpipers lead the parade and are followed by a variety of decorated floats and vintage vehicles. Uniformed organisations, such as the Boys and Girls Brigade also take part in the parade. 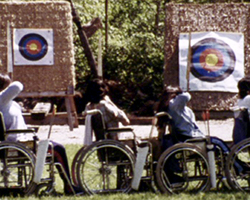 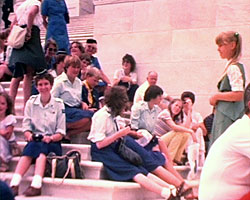 The paddle steamer Waverley arrives at Whitstable in Kent. Crowds gather on the harbourside to greet the steamer as it arrives. The Sea Cadet band plays as passengers disembark and the steamer prepares for the next leg of its journey. Passengers board the steamer before it departs for Southend and London.

An promotional film commissioned by the Pestalozzi Children’s Village Trust. The film compares life in developing countries with the opportunities Pestalozzi children receive at Sedlescombe, Sussex.

A BBC South East news item about the 30th birthday of the Pestalozzi village at Sedlescombe, Sussex. Reporter Robin Gibson interviews staff and children from Pestalozzi about life at the village.