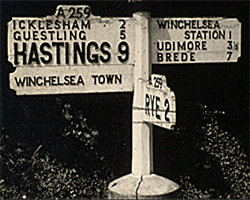 A portrait of the two towns of Winchelsea and Rye, highlighting landmarks and places of interest as well as the surrounding rural areas.