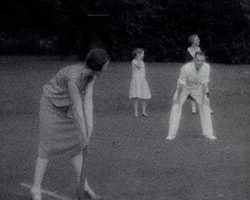 A very short film showing a series of street scenes in Bognor that includes cars on a coastal road; people on a road waiting for the cars to pass (possibly for a car or motorcycle club rally?); a car outside Bognor railway station [Possibly King George V arriving at Bognor station by train, before leaving in his car? also repeated on TID 8155].

A film showing a series of cars outside Bognor Station [Similiar to 8143] possibly with the King George V on board [?].