This film shows the family attending a wedding at St Helen's Church. The bride and two bridesmaids pose for pictures in the living room of a house, followed by the group making their way to the church by car. At the church the couple stand outside posing for pictures, interior views follow of the reception meal and the couple leaving by car, which has been decorated by friends and family with tape and shaving foam to read: 'Just married'. 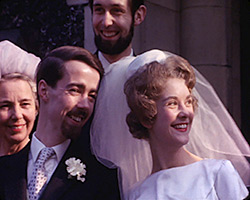