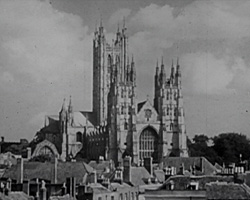 Scenes of a Rudd family cruise, seaside trip and school sports matches filmed over a period of four years by Mr. and Mrs. Rudd.