Home movie footage of family gatherings and outings. Children are filmed paddling in the sea, the film-maker and his family take a ride on a miniature steam train, and go on a picnic, and a set of grandparents hold a young baby in a garden.

Home movie material showing a family playing to the camera, with each other, and with a dog in the back garden of their terraced house on three separate occasions. The adults play leapfrog, a young boy plays with the boisterous dog, and one of the women holds out a kettle to the camera as she goes indoors to make tea. 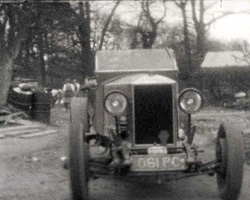 [Works at Fairmile Garage in Cobham]

This film shows a compilation of scenes at the Fairmile Garage in Cobham, Surrey with several men working on an Invicta car [?], and using machinery. Scenes also show the interior of the Garage with several cars being assembled. Outside a car drives up to the camera [061 PC]. The final shot shows a further scene of car mechanics working on a vehicle.

The 1928 National Rifle Association Kings Prize is won by A.C.Hale. This is followed by a further shooting event at Bisley in 1934 with the winners posing for the camera.