A Day in the Hayfield

Men and children are seen at work and play in a hayfield in this 1904 film by Cecil Hepworth. 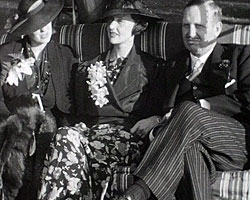