Markwick family members ride a miniature railway in the garden. They are seen sitting on the train, from the side of the track. The camera also follows the track, fixed to the front of the train. Four men are seen fixing the train before further "phantom ride" footage. 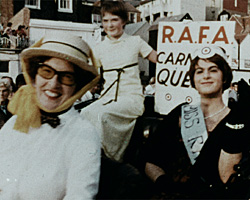 A travelogue of Hastings and St Leonards showing the old and the new town. Tourism activities including visits to surrounding attractions, ending with fireworks.