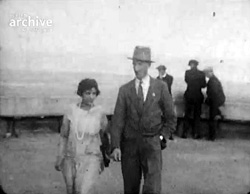 Title: “High Tides & gales”. A very short film showing scenes of a coastline being hit by high winds and rain, at a high tide, followed by a portrait shot of a woman smiling at the camera as she models.