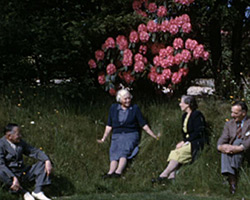 An amateur film capturing various cycling events in the Kent area. The Cyclists' Touring Club compete in the Tourist and Orpington Road Race. Members of the Southborough and District Wheelers club take part in the "Rough Stuff", 'Hilly 42" and the Tourists Trial. The Tour of Britain passes through Tunbridge Wells.

A home movie featuring a domestic garden belonging to Mr and Mrs Robbins. The film captures the garden and the work to maintain it through the changing seasons, including the floods of 1960. Other family scenes include the wedding of their daughter and teaching their grandchild how to walk.