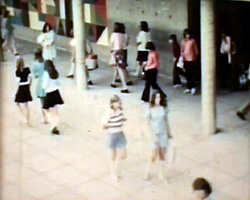 This film contains footage of a Red Arrows air show on Brighton seafront in 1974. Mr Horrobin films the planes and the spectators on the beach. The film also contains some camera-effect experiments and footage of Longhill School in Rottingdean, Brighton, where Mr Horrobin was a craft teacher.

This short narrated film shows fishermen at the Banjo Groyne where Magnus Volk's Brighton to Rottingdean seashore Electric Railway line once ran. A drawing is used to illustrate how The Pioneer tram or 'Daddy-Longlegs' looked, as built by Magnus Volk to take passengers to Rottingdean accompanied by a description of the line.