Two Gaumont Graphic newsreel segments are taken from their issue no. 382, from the 19th November 1914. They show the newly recruited 1st Southdown Battalion of the Royal Sussex Regiment at Eastbourne Station followed by footage of trenches entitled 'The fight for Dixmude'.

A compilation of films of local interest which which were exhibited in a newsreel format at the Capitol Cinema in Walton-on-Thames by its manager Clifford Spain. The films, from 1922, 1931 and 1932, record community events including an RSPCA horse show and several garden fetes. The camera pays much attention to recording the visitors who frequent the events. 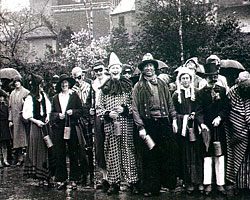 This short newsreel features a Southern steam locomotive on the Dyke Railway as it begins its last journey. Snow falls at The Dyke station as the Station Master, Mr Charles James Weller, is seen coupling the carriage to the locomotive and passing the 'staff' to the train driver to authorise the train's journey on the single track line.

This news item from Southern News captures the official unveiling of a plaque at 26 Guildhall Street, Folkestone. The plaque is unveiled by the wife of John Logie Baird to commemorate her husband's early experimental work on the premises during 1924.