This film shows highlights of the construction of a new street and housing development in Balcombe, West Sussex. Workmen are seen clearing the site with heavy plant machinery and constructing the houses in various phases.

The film opens with scenes of several hang gliders waiting to take off from a hillside and several in flight. A group of teenagers pose for the camera with Mrs Woodward, Kay, before a shot of Mr Woodward holding his dog. The next scenes show young people leaving a house with luggage before boarding a coach on Worthing seafront. Two girls play with the pet dog and cat in a domestic garden.

This short amateur film features shots of steam traction engines and motorised commercial and farm vehicles at an annual event near Horsham, West Sussex. Large crowds of spectators are gathered to watch as the vehicles pass through the field; a funfair can be seen in the distance.

A short amateur compilation featuring a motor sport event on Madeira Drive, Brighton followed by a family scene showing two young children playing in an inflatable paddling pool in a domestic garden, as a woman fills the pool with water from a plastic bucket.

The film opens with a large group of people laughing, talking and posing for portraits outside a hotel, followed by scenes showing a domestic garden with a small dog and a woman sunbathing in a swimsuit. The next film shows several members of the family and friends talking outside a house, and a boy riding a bike around a driveway between parked cars, followed by footage of nearby fields. The final scenes show a group at a garden party in the shadow of Harlech castle (?). 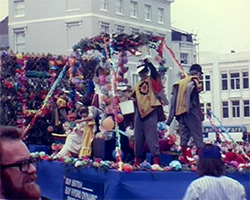 A family film showiing Sally's wedding, filmed outside the Church of St. Mary in Glynde, East Sussex, by Richard D. Brickell in the late 1970s.

This film shows wedding scenes, including the bride and her family gathered in the garden of a house; the wedding party arriving at the church with the minister [bride and her father] for portraits in the Churchyard. The bride wears a white dress with long sleeves, the bridesmaids in green high necked floor length dresses. The couple leave for the reception in a decorated open backed Land Rover whilst guests take group photographs on the steps [also on TID: 7681]

A comic fiction film made by the Eastbourne Cine Group about a "woman", played by a man in drag, who repeatedly fails her driving test.