The Victory over Japan Day in Lydd is commemorated through various activities held on the Rype.They include a Tug-of-War, some novelty races with men dressed in women clothing and gymnastic displays. The day ends with a bonfire and fireworks. The following day there are more games and races and a procession including civic dignitaries. 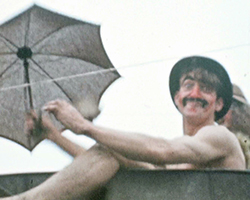 An amateur two reel film featuring activities at the annual Lydd Club Day on the Rype on Sunday 4th June 1950.

An amateur film of the annual Lydd Club Day activities on Saturday 16 June 1954.

A family holiday in Northern France. They travel in their own car using the Silver City Car Air Ferry. Once there, they visit local towns and beaches, including Arromanches.

A film of a family holiday to France and Italy. As well as playing on beaches, the family visit a variety of historical monuments such as the Colosseum.

This short amateur film features the second Lydd Airport Airshow on Easter Sunday 1968. The main part of the film features a display by the RAF Red Arrows Display Team. Other planes are seen taking part in flying displays and are interspersed with shots of static displays and spectators.