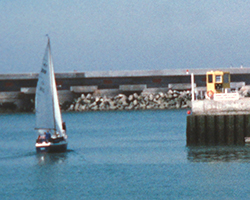 Haywards Heath Cine Society member Pierre Tester presents a brief film about Brighton Marina. Images of the marina and its yachts are accompanied by a commentary and an interview with Marina representative John Little.

An educational film made by Esso, about the planning and work involved in laying a new oil pipeline from Alton to Purfleet via Gatwick, across Hamshire, Surrey and Kent.