A misty exterior wide view of the Palace of Westminster with shots of traffic on Westminster Bridge. Beekeeping material and hunting material both largely duplicated in TID: 4904 and 4901 from the same collection, but with intertitles and are not shown online here.

This black and white family film shows a group of men playing golf on the Warnham Court estate, followed by highlights of Tennis (doubles) and a cricket match. The family watch from the terrace next to the house. The final film with intertitles shows a beekeeping film, demonstrating how to create an artificial hive. Two men use their bare hands to handle the bees.

A combination of black and white and tinted film showing scenes of a Red Deer herd in the wooded Warnham Park estate, with close-ups of several animals. The final few seconds of the film appears to show a derailed train and men assessing the wreckage. 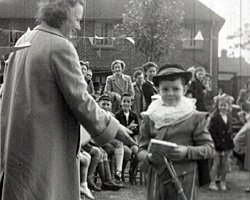