A film of Mr and Mrs Gowlland's holiday in Norway. Traveling around the countryside by car, they visit the city of Bergen; travel through the Jotunheimen mountains and past fjords including Hardangerfjord and Sognefjord and see a glacier and locals in traditional costume. They visit Lillehammer and Oslo, where they meet up with another couple and visit Vigeland Sculpture Park.

Lengthy home movie footage of a motoring holiday through Asia. The film-maker records their travels, filming the holidaymakers relaxing in the grounds of their hotels, swimming and playing golf, driving through the Indonesian countryside, and going on excursions to beaches and a nature reserve. 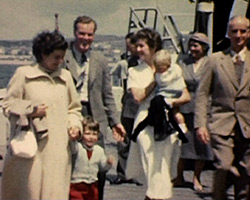 The film shows the Dickins family from Surrey and other holiday makers on a trip to Austria, with images of the group as well as the surrounding countryside and architecture. 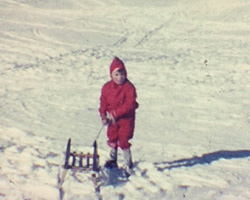 A home movie featuring the Murray family on holiday in Switzerland in 1955. The journey is made by train from London and by ferry across the English Channel; the family are seen tobogganing on the ski slopes. 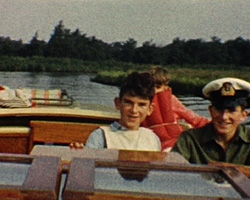