Skip to content
Searching for Gwynedd in County/region
Collections
Films 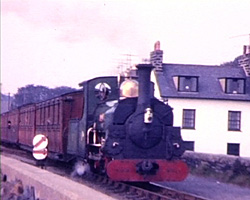 This film shows scenes of a wedding with portraits of the wedding party gathered before the service and the arrival of the bride. The bride and groom then leave the church with the family posing for pictures in the street. Scenes show friends posing for portraits in ornamental gardens, walking dogs with the film-maker's family on a heathland, and a group visit to Harlech Castle.

The film opens with a large group of people laughing, talking and posing for portraits outside a hotel, followed by scenes showing a domestic garden with a small dog and a woman sunbathing in a swimsuit. The next film shows several members of the family and friends talking outside a house, and a boy riding a bike around a driveway between parked cars, followed by footage of nearby fields. The final scenes show a group at a garden party in the shadow of Harlech castle (?).