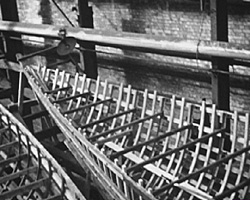 This black and white film provides highlights and views of races at Cowes with several class of yacht including 'J', 'W' and 6-metre classes, along with views of the Camper & Nicholsons Shipyard and Ratsey and Lapthorn Ltd sail making company on the dockyard at Gosport, near Southampton.