A compilation of film showing the state funeral procession for Winston Churchill, followed by family scenes on Hampstead Heath, with views of the exterior of Kenwood House. The final part of the film shows a visit to Parfett Street in Stepney, East London and the Dockyard. 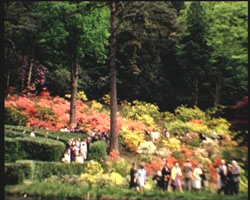 This family film shows tributes of flowers for a funeral laid out on the ground outside a house (death of a grandparent). Scenes of a wedding follow with a bride and groom exiting a church (the film is damaged at this point), and the family visit tiered gardens and woodlands in the Horton Hall estate/ The Menagerie Estate, Horton (?).