Made in Britain: Focus on Exports

An extract from a BBC programme Made in Britain, which looks at the changing fortunes of Dennis Bros. Ltd. The Guildford-based company, a manufacturer of specialist Commercial and heavy vehicles, is found to be increasingly focusing its efforts on the export market. The film has an accompanying commentary.

Images of the new Dennis F.44 Fire Engine driving around the streets of Guildford and Godalming, and on country tracks. The vehicle, with its Rolls Royce engine and automatic gearbox, is also filmed at Silverstone racetrack where it out-performs the Dennis F.36 Fire Engine. [Additional Siverstone material on TID 1620]

The latest Dennis Fire Engine, the F.44, is given a test drive through the streets of Godalming and on country tracks. It is also pitted against the F.36 model at Silverstone racetrack, where its superior performance is watched by chief fire officers. The film has an accompanying commentary. 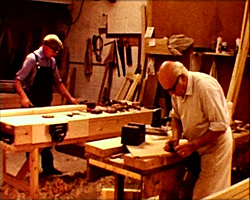 Firemen from across East Sussex compete with their station colleagues in a range of firefighting activities. Participating teams include Maresfield, Battle and Hailsham - the station judged the most efficient is awarded a shield. Later, the firefighters put on a display for the gathered spectators.