This short amateur film captures pupils at Fernhurst School. Two young girls are seen play- fighting and fooling around in front of a large bookcase.

[Girls fighting in library; Children at play in garden]

An amateur film featuring a compilation of scenes of some children from Fernhurst village. A group of children fool around in front of a bookcase, children play in a back garden and two girls wearing Girl Guide uniforms play-fight. 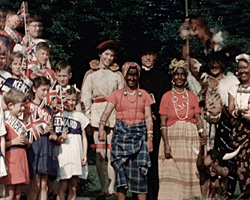