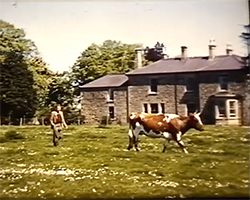 Footage of farm activity during a trip to Humby Hall Farm in Grantham, Lincolnshire.