[Scenes from Sweden; Celebration in Stockholm]

An amateur film-maker records a celebratory event in Stockholm. A woman is given the bumps before being transported through the city streets in a horse and carriage. The film ends with images of the narrow city streets and buildings.

In this 30 minute film, Mr and Mrs Gowlland record their holiday, touring around Denmark in their car. They visit Copenhagen and other towns, taking in the main tourist sights including Hans Christian Andersen's house in Odense and watch landbuggy sailing on a beach. 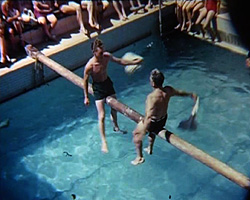