Amateur drama by members of Etham Cine Society about a businessman who commits suicide because of mounting debts. 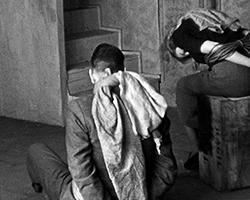 Film of construction work for the Corona Cinema in Swanley, Kent.

Amateur crime drama filmed by the Eltham Cine Society in the newly built Corona Cinema, Swanley. A police inspector investigates a series of robberies at the Corona cinema being leaked to the local press.