A young boy living in an Ockenden home plays tennis and goes swimming in 1984. 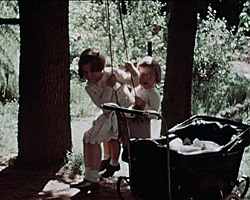