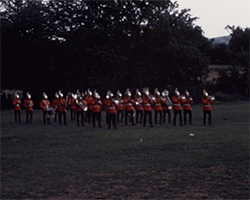 A military band parade followed by floats for Ditchling Fayre. In Brighton's Stanmer park there is a "Top Town Day" event where there are games, activities and sporting competitions, including: a sack race, and a game involving smashing a piano.

A member of Haywards Heath Cine Society makes a record of the Ditchling Fair. Images include footage of the festival queen being crowned, a performance of 'George and the Dragon', a dog obedience display and a marching band.