This black and white film starts with a bear in chains being made to perform tricks in a Chinese park. Mr & Mrs Simpson visit the Summer Palace in Peking and enjoy a meal in a traditional Chinese restaurant. The film ends with a shot of a printed advert for the Bradford Dyers Association on a billboard.

[Visit to Peking; The Forbidden City]

This black and white family film provides views of the Forbidden City, Beijing and the surrounding buildings. The second film opens with views from a balcony overlooking a courtyard, and shots of the Simpson family car surrounded by a group of local men within a ring of rickshaws.

This film shows a group trip aboard a large boat named 'Thistle'. The film show scenes on board, with the group sitting together on deck and a young boy in a sailor uniform. The group play games on the beach, and go for a swim wearing one-piece swimwear. They dive into the sea from a board on the boat. Shots are taken from a small boat on the water.

Film of people in the Bradford Dyers Association (BDA) office in Shanghai, and socialising in a courtyard.

[Canton; The Lion Steamer and Friends]

This short film shows a newlywed couple at their garden reception in Shanghai having their wedding photographs taken with the bridesmaids and pageboys. The group are dressed in co-ordinated western style clothing.

This film shows post wedding events and family scenes outside a house in (Shanghai) China. 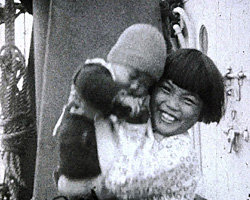