A compilation of very short shots that include a view of an approaching steam locomotive from a railway bridge, a shot of the sky; a group of men [Naval seamen in dress uniforms?] in a field at a distance from the camera - one with a pick-axe digging (?); closing with a bi-plane flying over head.

This brief film shows two women walking across a bridge over a river in the countryside, later seated on a style, lighting cigarettes. The film closes with the women sat in long grass smoking and posing for the camera. 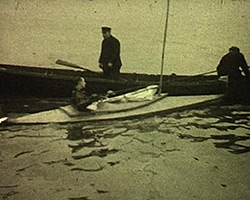