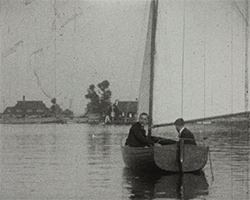 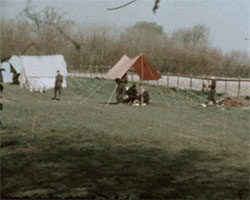 A compilation of scenes that include a School boys camp near Chichester, a walk on the Downs, a visit to Littlehampton beach, Chichester Harbour & Bosham.

This home movie features members of the Greenshield family as they spend their leisure time in and around Bognor Regis. Family members are seen at Bosham and on the beach at Bognor Regis. The daughters of Mr and Mrs Greenshield are seen playing in the garden of a former Police House at Bognor Regis and take part in a parade in the town centre.

A small crowd of villagers are seen assembled outside The Anchor Bleu pub in Bosham watching a side of Morris dancers performing. 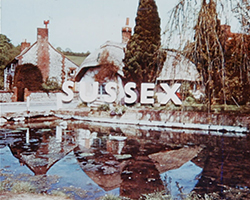 A family travels by car around Sussex visiting various towns and sites. Featured are harbour and countryside scenes as well as towns and cities such as Chichester, its cathedral (with interior and external shots), Arundel castle, illuminations in Brighton and Shoreham harbour and power station.

An amateur film containing scenes of the Butler family on a trip to the seaside.