Scenes at a Biggin Hill air display in the 1960s. Red Arrows, biplanes, Red Devils and fighter aircraft participate in the show, filmed by Mr. Harrison, a member of the Brighton Cine Club.

Scenes filmed at Biggin Hill Air Display in Kent in September in 1962 by Mr. Harrison, who filmed several such events.

Scenes filmed at a Biggin Hill air display in Kent, 1962, by Mr. Harrison, a member of the Brighton Cine Club. The Red Arrows, helicopters and fighter aircraft all make an appearance at the RAF display.

Scenes from Karen's christening party and a picnic in the garden with family members, filmed by Mr. Harrison in 1962.

[Air Show; 25th Anniversary of the Battle of Britain]

A short amateur film capturing an air show at Biggin Hill Aerodrome which marked the 25th anniversary of the Battle of Britain. The film includes shots of a variety of aircraft flying overhead and spectators on the ground, including members of the Experimental Flying Group which was based at Biggin Hill. 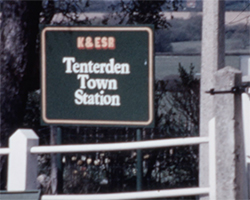