The film shows the Dickins family from Surrey and other holiday makers on a trip to Austria, with images of the group as well as the surrounding countryside and architecture.

Amateur footage taken during a holiday to Austria. The film-maker concentrates his camera on panoramic images of mountain ranges and ski resorts which stand idle during the summer months. 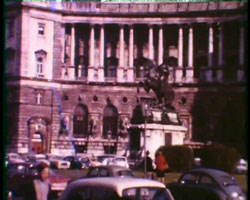