Skip to content
This virtual event, coming live from the Record Office, will take you behind the scenes to explore a fascinating series of films, photographs, documents, maps and artworks.

The event will draw on the collections held by West Sussex Record Office, which holds archives for the county dating from AD780 to the present day.  And from our archive, we have prepared a compilation that provides a grand tour of the National Park. It features panoramic views of the Downs, planting in early spring at Elsted in the mid-1930s, Land Girls bringing in the wheat harvest, the Findon Sheep Fair from the late 1970s and the making of a wattle hurdle. It concludes with probably the oldest surviving film of West Sussex. Made by James Williamson in 1899, it is of the Devil’s Dyke resort established near Poynings. It presents the four attractions offered to the late Victorian visitor: Swing Boats, a Carousel, the Cycle Track and a Switchback.

Why not explore some of our other collections in which the Downs features as the main backdrop.  For example the Cyril Hayworth Collections:

Amateur film-maker Cyril Hayworth filmed scenes and events in Lindfield in Sussex and the surrounding area during the 1940s, 50s and 60s. During the Second World War, Hayworth made several films documenting the activities of both Scouting and Guiding groups from the Forest Hill and Sydenham areas of Greater London, with a handful of these films including material of war-time scenes of bombed out houses and churches, as well as the Scouts parading and marching between district parish churches. Following the Second World War, Hayworth relocated to Sussex and spent time working as a Scoutmaster documenting his, and many other, Scouting and Guiding groups in the district, along with close friend and fellow Haywards Heath Scoutleader and Scoutmaster, Vic Forster. 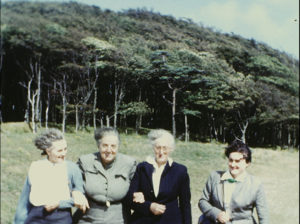 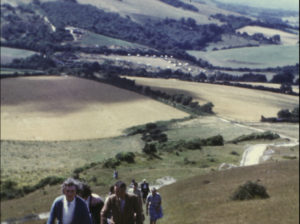