It’s finally September and the hops are waiting to be harvested – but where are the hop-pickers, those great legions of East Enders once seen every season at work in the hop fields of Kent?

Like much from Britain’s past, they’ve long been automated out of existence but Screen Archive South East, together with Kent Archives, are offering you a chance to relive those times by visiting their latest free-to-view online presentation. Follow us on twitter: @screenarchive @kent_archives and facebook @screenarchivesoutheast @kentarchives.

This nostalgic package of archive films, photos and personal testimonies will transport you back to the glory days of life in the hop-fields. And, given that the Covid crisis has resulted in the cancellation of many hop festivals and celebrations across the county, we will, by way of compensation, showcase what we believe to be the oldest colour film of hop-pickers in action during the late summer of 1937: Hop Picking at Mr Whiteman’s Garden Tyler Hill, Canterbury. 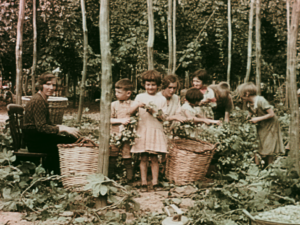 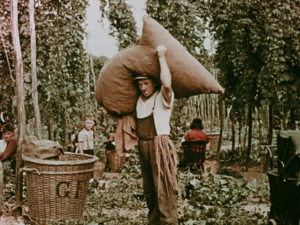 This eighty-three-year old film brings what was once a common sight in the hop fields of Kent back to life – and it’s all the more vivid for being filmed on what was then a recently introduced colour stock called Kodachrome. Produced by Sydney Bligh, a well-known local filmmaker of the period, it features hop-pickers at work in the gardens of Mr G. F. Whiteman at Tyler Hill in Kent – whose hop-farm specialised in growing a variety known as Goldings, much renowned for its smooth and honey-like character. Though the original film stock has faded considerably during its long life we have managed to restore it to something approaching what it looked like on the day it was made – on the 6th of September 1937.

Accompanying this amazing film is one of our more recent productions ‘A Year in a Kentish Hop Garden’ which takes a lyrical look at a typical year in the life of a hop-field.

To complement these films, Kent Archives has assembled a fascinating collection of hop-related records that present a variety of stories about Kent’s agricultural past. There are maps and plans which show the areas of Kent dominated by the agriculture of hops. There are photographs and postcards showing many aspects of the hop-growing and drying process, which took place in oast-houses, the most distinctive and unique architectural feature of the Kentish countryside – a design that could even be adapted into a bus shelter on the A20!

The Reverend Robert William Harrison Acworth’s scrapbook is a particularly rich source of material on hop picking in 20th century Kent. He compiled photographs, illustrations, newspaper cuttings, leaflets and poems, featuring, for example, photographs of Mr Webb and Mr Turner, the ‘tallymen’ at Stuppington Farm, Canterbury (which was also filmed by Sydney Bligh in the 1930s.) Special events such as the visits of the Bishops of Southwark and Rochester to hop picking camps are also recorded in the scrapbook  https://www.kentarchives.org.uk/collections/getrecord/GB51_U3685_11_1

The relationship between various church organisations and the hop-pickers, who were in the majority of cases extremely poor, runs like a thread throughout our collection. This connection can be seen in a charmingly informal film which records the work of the Crowhurst Farm Mission for hop-pickers in East Peckham.

The Crowhurst Farm Mission is vividly described in the reports and personal memoirs of the Reverend Miles Sargent. His sympathetic writings lay bare the gulf that existed between the poverty of the hop-pickers and those concerned for their material and spiritual welfare – and where the volunteers’ first task was to ‘build a bridge of trust and friendship across the chasm of class and education that separated them from these families.’

St Francis of the hopfields by Helen Allinson

Saint Francis of the Hop-Fields Allan, 1933

More revelations come with Kent’s Medical Officer’s 1929 report on the ‘medical treatment of hop-pickers and sanitation of hop-pickers’ encampments’ – where hop-pickers, in addition to the diseases of poverty which they already suffered, were susceptible to hop-rash, hop-wrist and hop-eye. The church missions also organised healthcare facilities for the hop-pickers, who certainly couldn’t afford doctor’s or hospital fees in a pre-NHS Britain. Both student and qualified doctors and volunteers would work on schemes aimed at providing healthcare for the hop-pickers across the county – often accompanied by traveling dispensaries where medication had to be taken in front of the medical staff!

From the post-war period, you’ll see a 1953 description of hop measuring techniques, a ‘Universal’ hop-measuring account book from Cronk’s Farm at Nettlestead and a 1958 letter of complaint from a hop-picker of twenty-five-years who was ‘shocked and distressed’ not to be asked by Whitbread to pick that season. It is also significant to note that the earliest mechanical pickers were in use at the same time that our 1937 colour film was produced – and that the days of manual hopping picking in Kent were numbered.

If you would like to know more about the film maker Sydney Bligh, Tim Jones, Senior lecturer at Canterbury Christ Church University, has researched and produced a remarkable and award-winning documentary called ‘Seeking Sydney’. This short film tells the story of both Sydney Bligh’s life and his film making as seen through the eyes of his granddaughter, Helen Jarrett.