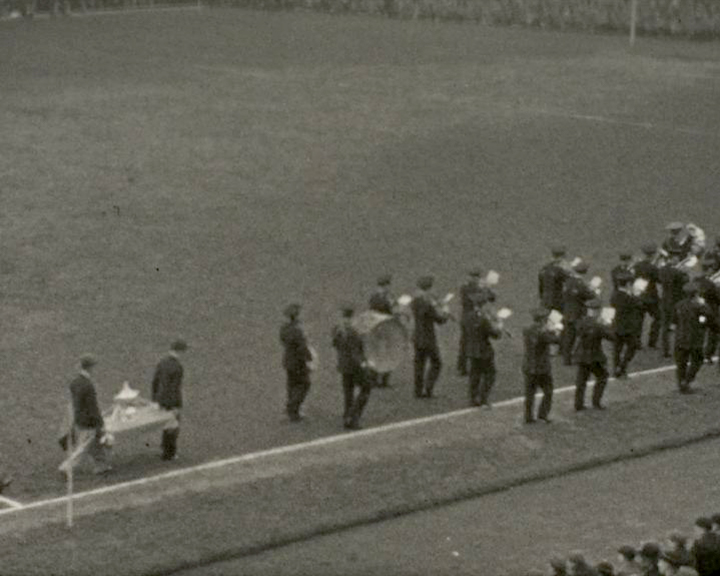 This film opens with scenes if the family sitting in their living room. A woman plays with a dog and an older man smokes a cigar.

The second film provides highlights of a football match at Molineux Stadium home of the Wolverhampton Wanders Football team. The film opens with a match being played (possibly vs Bolton Wanderers?), followed by views of the Wolverhampton Wanderers team raising a previously won FA Cup over their heads before being passed to a man in a suit, whom in turn does the same showing it off to the crowd, whilst a policeman stands close behind him.

A brief shot of a game in progress (ball kicked from centre position on the field of play - second half of match ?), followed by shots of the cup being paraded behind a marching band in front of a packed stadium. Mixed shots of the crowd on their feet in the stands, cheering, waving and celebrating in front of the camera. Colour footage of the same game and trophy being paraded is available on TID_9996.

The final film shows a series of domestic scenes. Three women standing in a kitchen talking and smoking cigarettes on long cigarette holders. The camera captures a women rearranging her under skirt or petticoat under her dress. In a garden an elderly man sits on a bench wearing a large overcoat and flat cap smoking a pipe, smiling at the camera. In the Challock garden, three women sit together and play with the dogs.

Colour footage of the same game on TID 9996.