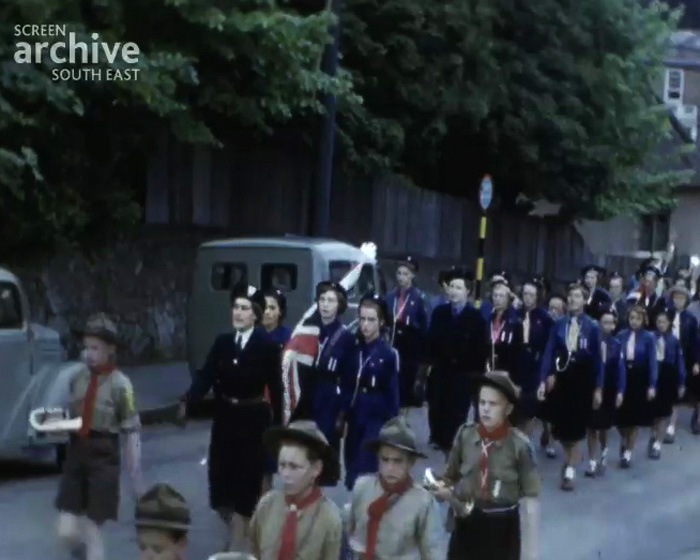 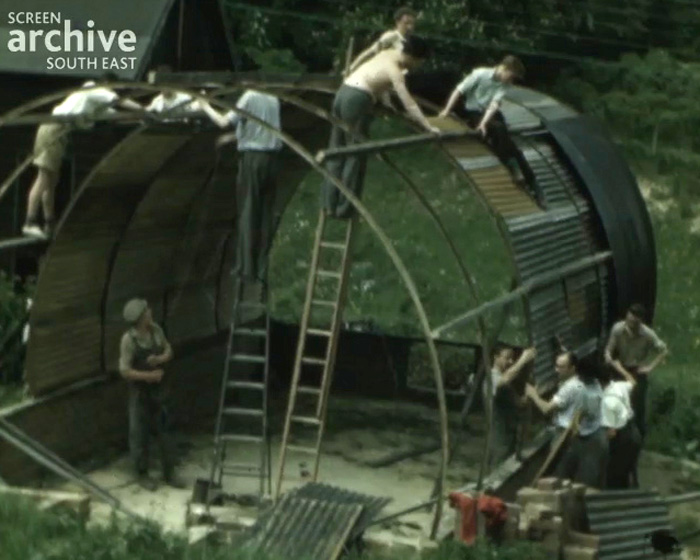 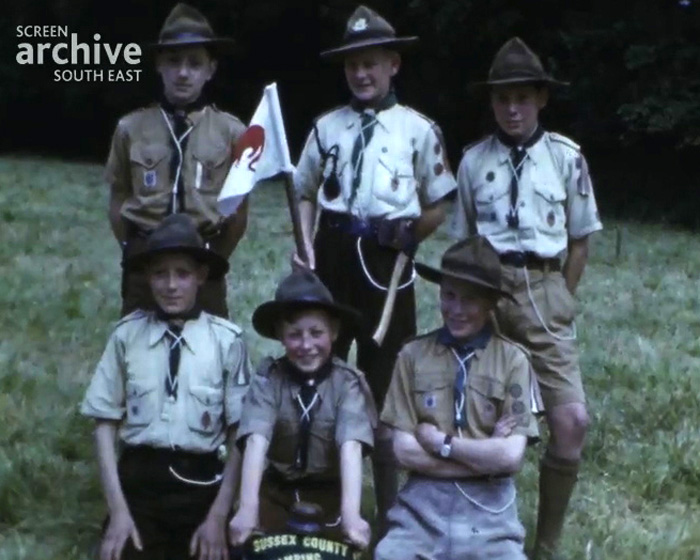 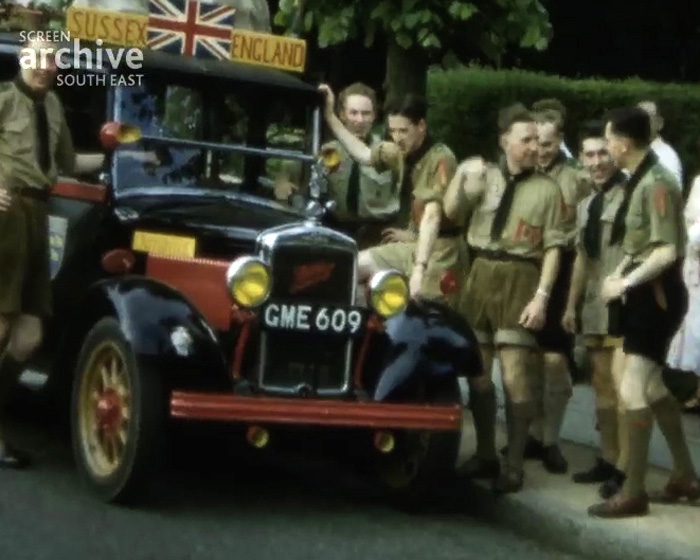 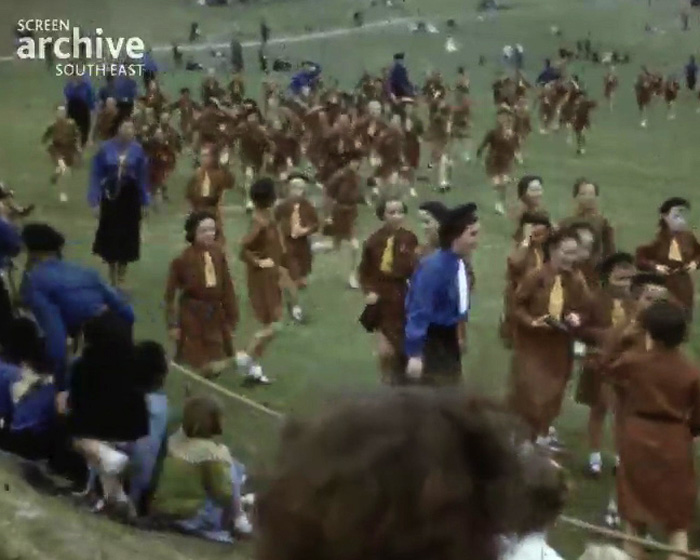 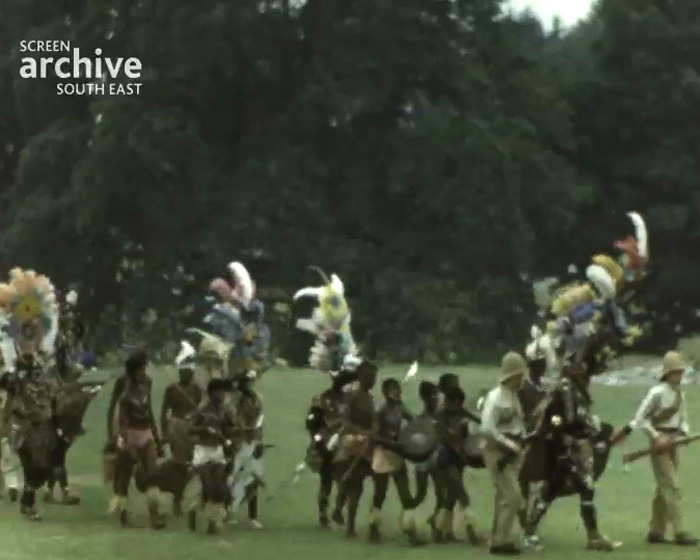 The first scene on this compilation shows the Sharrow Court School Swimming gala, showing boys swimming with balloons and friends, family watching from around the pool, and ending with a prize giving ceremony.

Film of Bolney Church Parade shows the Slaugham Wolf cubs, Slaugham Scouts and the Bolney 1st Scout Troop walking up a street into a churchyard. The film then cuts to a second parade featuring: a procession of British Legion veterans; the Slaugham Boy Scouts; a company of Girl Guides; and a troop of Slaugham Wolf Cubs all marching together on route to Slaugham Church for a service. Several of the British Legion men wear their service medals as they enter church. A brass band plays outside the church with the congregation gathered to watch.

The next section shows of a group of Rover Scouts clearing away tree stumps and shrubs at the Ashenground Scout site, using a winch, with one Boy Scout at the top of the entrance post placing a stags head on the frame.

The next section shows a marching parade for the St George's Day event, Bolney with several troops including the Slaugham and Horsted Keynes Scouts, meeting up with several companies of Girl Guides in the Churchyard. The film cuts shots of a Scout leader standing on the steps of Bolney War Memorial with another Scout leader and an other older man in a suit (possibly the Haywards Heath former Scoutmaster ?).

The next sequence shows a group of men and Rover Scouts building a Nissen Hut in a field, slotting sheets of corrugated iron together on the metal curved frame. Three children dressed in oversized clothing, play next to where the men work.

At a camp, a troop of Scouts gather in a field with their kit bags ready to go on an excursion, followed by portrait shots of family and friends gathered on the field. The shot cuts to the Slaugham and Haywards Heath troops gathered on the Ashenground site to be awarded the Hardy Cup and a series of badges, shaking hands the opposite way around (?). Mixed shots follow of several Scouts cooking food in a pan on a field stove.

The next section opens with a parade of Girl Guides (5th Crawley, Haywards Heath (St Winifrid's) and Franklands Village (?) companies plus others) passing through Haywards Heath, lead by a marching band from Horsted Keynes Boy Scouts (?). Portrait shots of several girls are followed by shots of several senior Scouting leaders and Scout Master's in a field at Beechhurst (?). The film then cuts to scenes featuring several groups of Boy Scouts and Sea Scouts gathered in a field waiting o be awarded a prize of a large earthenware jug for the 'Sussex County Camping Competition'.

The shot then cuts to highlights of a County Camp Rally at Beechurst, where a large number of Scouts run around the camp field, followed by a very large procession and parade of flag bearers and Scouts, watched by hundreds of spectators from a grass bank next to the field. Mixed shots of the Boys taking part in sports and physical exercises follow, as well as several games and a St George and the Dragon play rehearsal (?). Several boys build a rope bridge, a swing, and large lookout, to demonstrate their knot tying skills. A Circus Skills troop then perform and parade on the field. The sequence closes with a group of Girl Guides dancing together.

The next section cuts to a St George's Day Parade in Ardingly. The Haywards Heath Rover Scouts club vehicle 'Arabella' passes by, filled with Haywards Heath boy Scouts waving from the back. Several spectators and Scouting groups arrive on foot. Spectators gather in a village street to welcome the parade, led by a marching band (Salvation Army?) ahead of the Ardingly, Balcombe, Bolney Haywards Heath, and Slaugham Scout troops and Guides. The parade files up to St Peter's Church, Ardingly for a service, then passes through the village to assemble together on a large playing field.

The next scene opens with views of an outdoor swimming pool with boys taking part in a Swimming Gala. A mixed group of friends and family sit on deck chairs watching the competition (some shots out of focus). A brief shot shows the Haywards Heath Rover Scouts standing next to their car 'GME 609' named 'Arabella' on a street.

The next section shows highlights of the Scouts and Guides St George's Day Parade in Cuckfield Churchyard, being led by a marching band. The troops parade through the churchyard and into the church. Following the service, the troops and companies march up a high street and on to a playing field.

The final section opens with a group of Scouts standing on a hill dressed as Colonial British soldiers, cutting to a very large Rally of Cub Scouts and Brownies gathered in Victoria Park, Haywards Heath, holding hands in a long line. Groups of Spectators watch from park benches. Highlights of the rally include: various parades form a large group of Brownies; Girl Guides and a marching band; speeches under a Union flag on the field; and a parade of African Tribes - children dressed in traditional costume to perform for the watching groups and public. The 'tribes people' are joined by the group of Haywards Heath Scouts dressed as Colonial soldiers to re-enact a historical scene, or performance, followed by mixed scouting and guiding demonstrations. 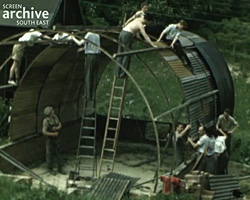 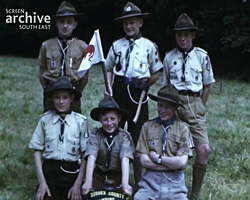 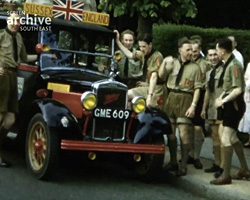 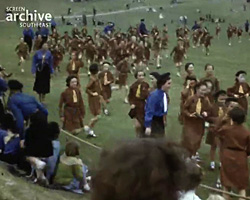 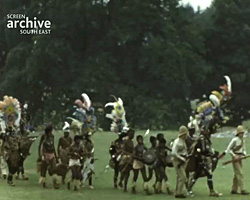