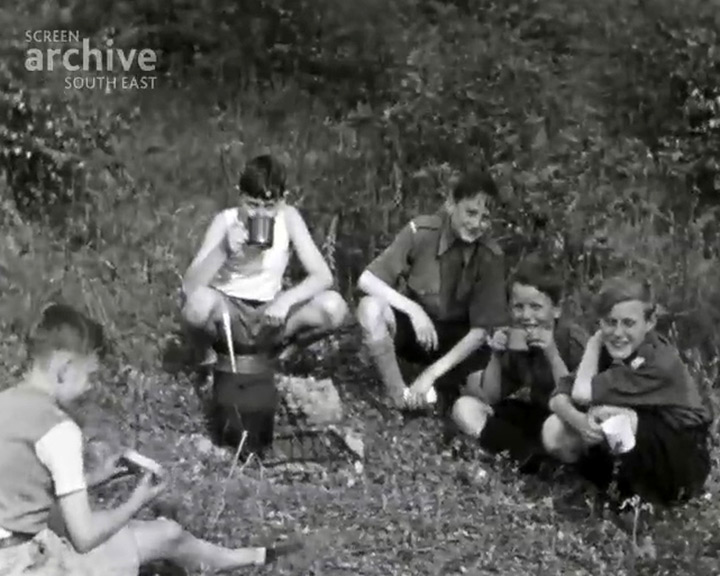 [Not in clip] This film opens with views of Scouts swimming in an outdoor pool, racing each other, whilst holding their clothes on a stick above water. Two senior Rover Scouts do water acrobatics and diving, watched from the edge of a pool by the other Scouts, pack leaders and several families.

[Not in clip] The next section shows scenes from several stage performances including theatre, comedy sketches, group singing and demonstrations. This is followed with the boys having their make up applied, behind the scenes. The action then returns to the stage performances with highlights of further variety acts and theatrical based sketches including a 'blackface' 'minstrel' style show in full costume and make up, and several Rover Scouts performing a parodied ballet routine in drag, wearing spotted skirts and bras.

[Included in clip] The next section shows scenes of a mixed group of Scouts and women meeting outside Haywards Heath 'Southern' Railway Station, waiting for the troop to arrive before the group file through the station on to the platform. Shots follow of the Scouts boarding a train, as parents wave to them from the platform.

The film then cuts to a group of adults and Boy Scouts gathered under a tent in a field on camp, accompanied by several older Rover Scouts. The group have a meal and enthusiastically wave at the camera. Portrait shots follow of a group of young women with two older Rover Scouts (family group?) on camp, followed by wide shots of family groups and Scouts gathered around a fire whilst a Scout leader conducts a camp fire singsong.

The film then cuts to a swimming pool where several Scouting leaders dive off the diving boards and supervise a group of Scouts in the pool. Friends and family have gathered around the end of the pool to watch.

In a wooded area a group of younger boy Scouts dig a trench. This is followed by views of the camp fire with several Scout leaders seen smoking. The shot cuts back to the boys digging. A montage of portrait shots follow that includes: three boys holding a Union flag and the Scouting flag with crest and motto 'Be Prepared'; three men standing next to bicycles on camp; a Scout buttering a tray of bread slices sat on the woodland floor; and another who fans a fire whilst others set up camp. Several boys prepare a meal followed by general scenes of boys and leaders gathered on the Ashenground camp (?).

The next sequence provides highlights of an adult Rover Scout investiture ceremony, with the Rover Scout being presented with his badge and epaulets. The ceremony includes a hand washing ceremony on a table (?) draped with a Union flag.

The next scene opens with mixed views of a group of Scouts on a camp preparing a meal and washing pots and pans in the open, followed by shots of a Rover Scout patrol on parade and a group of Girl Guides and Cub Scouts in a woodland camp working together.

The next section opens with several young Cub Scouts (not in uniform), climbing trees and sitting together with a group of adults eating a meal. Mixed shots follow of the troop gathered in another camp and standing around the flag pole. The Cubs play a game with pieces of paper in a box tied around a tree (?).

The next section opens with Scouts from 2nd Haywards Heath on St Richard's Church roof, cleaning out the guttering. Wide landscape views show a village and church covered in snow. A mixed group play ice hockey, and go sledding down a hill. A Scout leader with a blanket over his shoulders leads a sing song around a camp fire.

The final section (bright and over exposed) shows mixed views of several men gathered around a flag pole and portrait shots of a family group with a baby pointing at the camera. A pack of Boy and Rover Scouts are shown doing chores including building fences and moving logs around the camp to build seating.