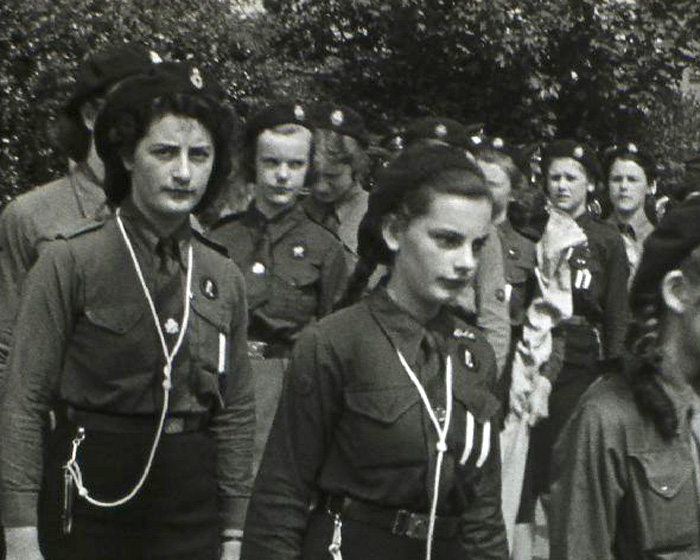 The film opens with a series of shots of a village street with several women entering a shop (?) together followed by a group of Guides and Brownie packs setting up camp in a field, then sitting on the grass in uniform and collecting firewood for a camp fire. Three girls display their badges for inspection on a makeshift table and have their tents inspected by Guide leaders. The group take afternoon tea, followed by demonstrations of first aid. They sit together around a large camp fire next to a hut to sing songs as a group. A cup is presented by an older man to two Girl guides, followed by speeches and a portrait shot of a group of girls with their cup standing together (some shots are out of focus). The next part shows a large gathering of Girl Guides and female Sea Scouts (?) in a large field, cutting to a small group of female Sea Scouts dancing together and a brief view of a fancy dress parade or performance (?).

The next part shows several Scout and Guide groups on parade on a street as they file in procession through Haywards Heath village on to Muster Green. The Scouts and Guides then stand together on the green whilst the flag bearers do a manoeuvre with the flags in the middle of the gathering, to then march away from the group. Mixed shots follow of adults and family groups on the village green watching the event.

The final sequence shows a group of Brownies and Guides pretending to be locked inside the back of a Cattle transporter as it pulls away down the street and a brief view of older Scout leaders on an industrial farm site (?).