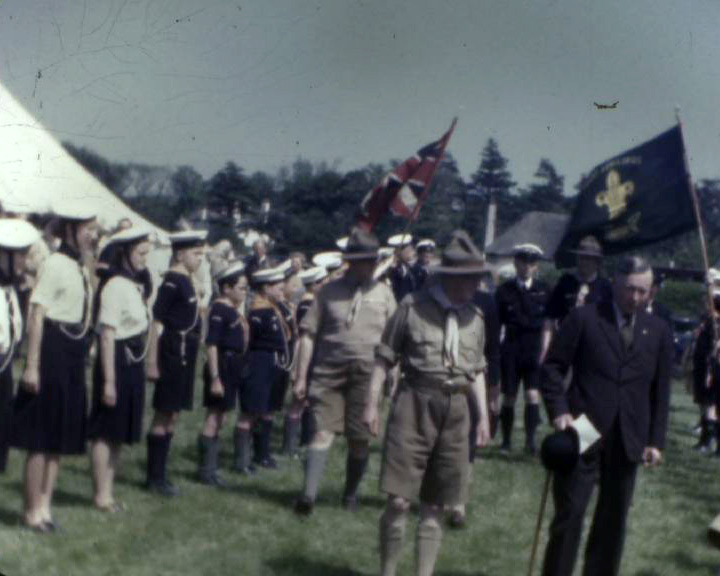 This film opens with a group of Scouts getting off a bus in Battle at the Abbey Green, to tour the village. Sights include St. Mary the Virgin Church, Battle High Street (?) and the ruins of Battle Abbey and Battlefield. Views of the Abbey include the former Battle School building and Monks Dorter. Outside the Abbey, two buses wait for the group on Battle Green, with views of the shops in the high street opposite.

The scene then cuts to wide and mixed shots of the Telham Scout camp, as a group of Cubs, Scouts and Sea Scouts gather together with group leaders on the field. Various adults and parents watch the Scouts on the field from outside the arena. A female Scout (?) dressed in green top and red neckerchief watches from behind the rope. Mixed shots then follow of several Guide leaders greeting Scout leaders next to a car park in an adjacent field. Rows of cars and a bus, can be seen in the field behind.

In the next shot a group of Guides arrange the Sussex Guide standard in the field ready for a parade, followed by shots of several Scouting and Guide troops on parade in the field with their flag. Groups include the 1st Haywards Heath company, Hastings company, and the 1st Hove Cubs with various groups of Guides behind them.

On the display field, a group of girls dance together in small groups dressed in costumes and top hats (?), followed by a larger group of girls performing a Scottish group dance (?). A parade of costumed performers circles the field, stopping to listen to talks and speeches by the adult leaders followed by a parade of Guides passing of a row of county Scouting and Guiding leaders, as they inspect the Sussex County divisions in the field. The group lower their flags to ground level.

The final film shows a mixed troop of Scouts (green with red border neckerchiefs) demonstrating a club throwing routine from the Circus Skills badge, accompanied by a Cub (1st Haywards Heath in blue with red border neckerchief ?) accompanied by shots of other groups doing stretching exercises, a boxing match and a trust exercise in a circle (red and blue half split neckerchief) ending with a wide almost empty view of the Scouting camp field.