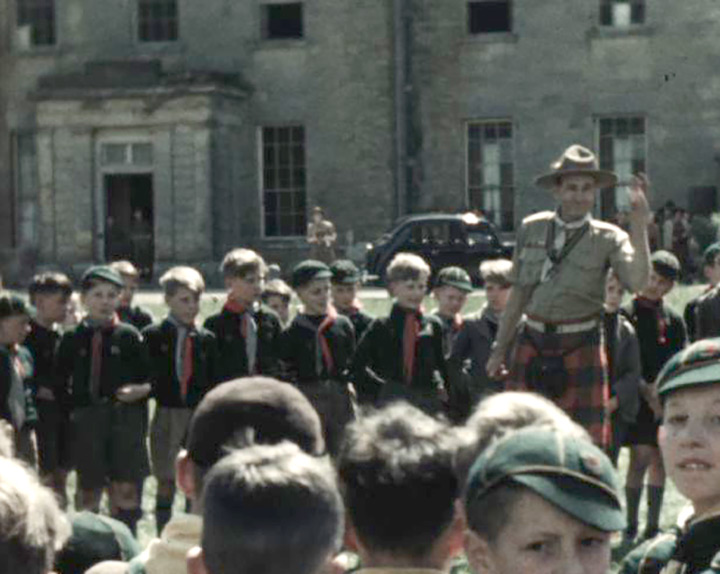 The film opens with outdoor views of the Sussex County Scout Rally camp in the grounds of Stanmer Park, Brighton. Views follow of several Cub, Boy Scout and Sea Scout divisions gathered in smaller encampments on the site preparing their tents and unpacking food supplies including Haywards Heath Scouts. A Jewish Scout (Haywards Heath group ?) wearing a Jewish scull cap unpacks food supplies, the camera follows him. The next scene opens with a montage of landscape views of Stanmer Park House and Grounds, followed by a series of shots of Rover Scouts sitting outside their tents. Lord Rowallan (wearing a kilt) inspects the individual group camp sites with County Commissioner Colonel Hickie.

On a podium stage, Lord Rowallan addresses a large group of Cubs in front of Stanmer House, closing with the Scout Salute. The Cubs, Boy Scouts and Rover Scouts then gather on the field to watch Lord Rowallan unfurl the camp Union flag and talk to the entire camp from a raised podium with Col. Hickie. There are cheers from the crowd as they finish.

Views of the Haywards Heath section follow, beginning with family and friends gathered with the Scouting groups cooking a meal, followed by individual shots of a family group on a picnic, a group of girls dressed in costumes eating ice creams (Haywards Heath Girl Scouts?) followed by shots of 'Uncle Bill' Genese talking to Scout leaders and a portrait view of girls in costume outside Stanmer House. The film-maker follows several divisions of Scouts charging on to the field, followed by a formal parade across the site where a group of Scouts hold the Sussex county standard.

The next sequence shows a mix of activities on the main field that includes a group of Boy Scouts whistling a tune being conducted by a Scout leader 'Uncle Bill' Genese addressing the entire camp from the podium, Scouts building various rope structures, first aid pulley systems and rope swings as the crowds watch. A gymnastics display from the Sea Scouts is followed by a Morse style signal display by a Scout, up a tall mast that is being lowered by a group of Scouts.

The shot cuts to a portrait shot of Bill Genese and Col. Hickie eating scrambled egg from a Scout hat making faces at the camera in front of Stanmer House. A parade of Scouts and Mr Bellamey (dressed in a Circus ring master costume) lead the 'Sussex Scout Circus' on to the field, followed by a group of Scout drummers and others in costumes of St George and the Dragon. A group on high stilts are the last to enter the field. On a podium a girl in traditional Scottish costume dances a Scottish sword dance and the Circus skills group run amok on the display field whilst the Scouts on stilts play a game of Football. The film ends with a group of Scouts and Girl Guides dressed in costumes dancing together on the parade field.

Lord Rowallan joined the Scout Movement in 1922 as a District Commissioner. In 1944, he became Scottish Headquarters Commissioner for the training of Scout Leaders and in the following year was appointed Chief Scout of the Commonwealth and Empire.