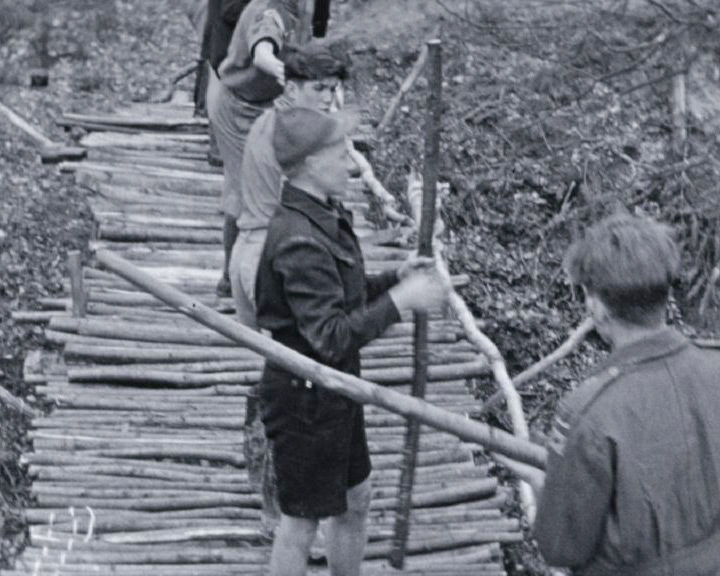 This film opens with black and white views of a group of Boy Scouts taking part in group and individual agility challenges at Broadstone Scout camp (Broadstone Warren?). A group of boy Scouts work together to build a wooden bridge, rope swings and rope bridges. They climb ropes up trees and build makeshift outdoor shelters from branches and leaves. The shelters are inspected by three Scout leaders. The group then build a long wooden bridge as a team, to be 'officially' opened by a man in a suit who cuts a ribbon. The man cautiously takes the first crossing over the top. The Boy Scouts cheer three times as the man gets to the other side of the bridge; they then follow a Scout leader over the bridge.

The next section opens with views of a large house (?) and a group standing on a balcony waving at the camera, followed by a group of Boy Scouts playing a game of Rugby in a field. The film ends with a view of a group of older Rover Scouts listening to a talk or speech by two Scout leaders in front of the house (?).

The next section in colour, opens with a static wide shot of a bell hanging in a frame on camp, followed by a view of a Union flag wafting in a breeze on a pole and a dragonfly on a pond. The next scene shows a wide view of a Scout group during a field church service. The Boys disperse following the service.

The final sequence, in colour shows the Scout Group taking part in field activities rope climbing and bridge building at the Broadstone Scout camp (?). Scenes show a boy shimmying up a rope to a tree; a boy on a makeshift raft; climbing rope bridges and pulley lifts; and a brief shot of a horse in a field with a woman (?).