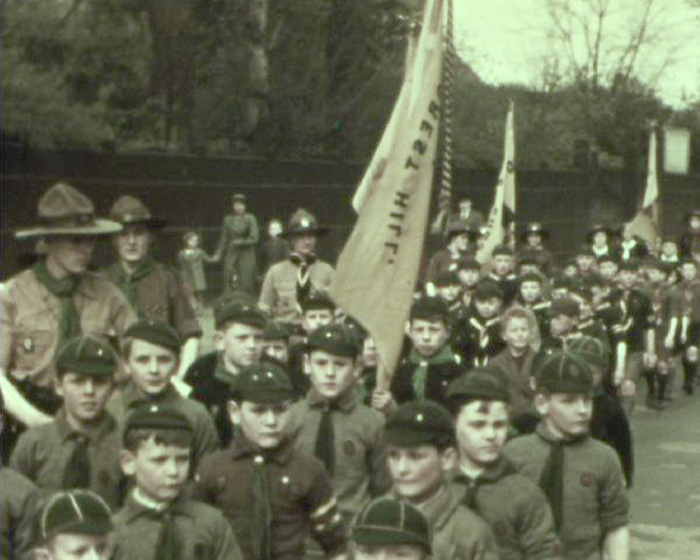 This film opens with an intertitle: 'Church Parade' followed by a series of street views of the 8th Forest Hill Scouts standing on parade. As the group march into a church (?) they are closely followed by a group of Guides and Brownies (possibly also the 8th Forest Hill company?) gathered in their groups behind. The shot cuts to a wide view of the church exterior from across the street (a bombed out version of a similar shot can be found on TID 9907) as a pair of Guides enter the church carrying a Union flag and their company flag.

The next part with intertitle: 'The Silent Helper', opens with interior shots of the inside of a church hall, where the Cubs/ Scouts practice a range of activities that includes a demonstration with a light bulb (?), a boxing match, uniform inspection, flag semaphore signalling, hopscotch games, rope knotting practice, piggy back races and a First Aid demonstration using neckerchiefs. In one corner of the hall a group of cub Scouts salute and pledge the Scout oath cutting to three Scout leaders sitting at a desk sorting out money (?) and sheets of paper (?). The shot then cuts to a group of Scouts lowering the Union flag in the hall, symbolising the closing of their meeting. Outside in the churchyard, the 8th Forest Hill pack have gathered for photographs, sitting on wooden benches near the church entrance.

The film ends with a colour montage sequence of a local district Scout parade in front of Sydenham Methodist Church, featuring packs/ troops from the local area including: Honour Oak, St Saviour's Forest Hill, Forest Hill St George's, 4th Sydenham Pack, Holy Trinity, and Bell Green Scout Packs among others. The final shot is of a No.12 Sydenham Routemaster style bus, passing the parade on the street behind the boys as they march in their packs to the church.