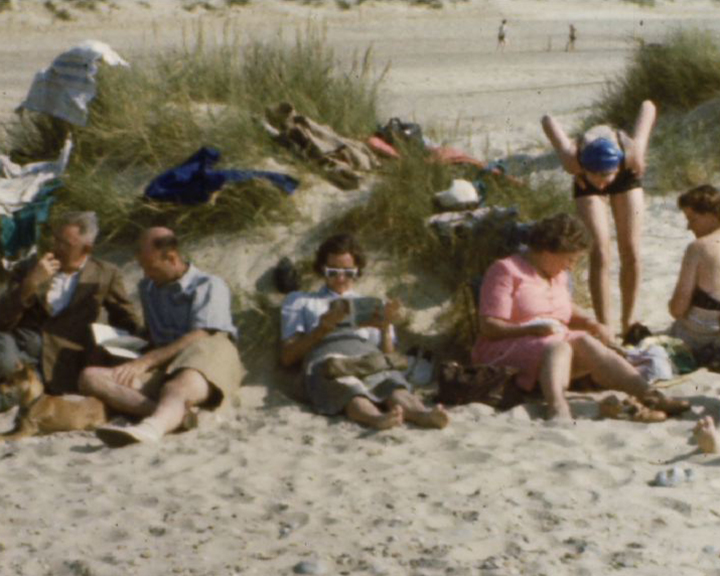 The film opens with a compilation of shots at Blakeney Point, Norfolk, showing two ladies dressed in swimwear on the beach and rural village scenes with a churchyard and village stores or public house. A white finger-post (signpost) on a country lane indicates it is two miles to 'Aslacton'.

In the next section, the family sit on a beach eating a picnic. A dog plays with a ball and a piece of string, whilst a man repeatedly buries the ball and string in the sand for the dog to dig up and find. Several children build sand castles on the beach.

In the next section two women play a game of tennis on an enclosed tennis court in a rural countryside location. In the next sequence there are a series of panorama shots of the landscape. This is followed by views of a village (Wells-next-the-Sea?), Wells harbour and of the coast, with cars and passenger vehicles on a road. A mill or industrial building is on the opposite bank of Wells Harbour. The final shot is of a plane with four engines (?), flying overhead.

The next compilation of sequences opens with a young girl swimming in the sea. This is followed by the family watching a sports day or steeplechase race event in a rural village location. An ice cream vendor sells ice cream sandwiches to a long line of people. The seller scoops ice cream in between two wafers with a rectangular tool. The sign on the front of the stand reads "Pure Ices. Guaranteed Pasteurized. S.Coleman". A shot of the course of the long distance steeplechase follows with the runners passing the camera. The next sequence shows the family on a walk in the countryside.

The next sequence returns to the beach with the family sitting next to sand dunes. A young boy looks like he had been buried in the sand. Two lades run out of the water towards the beach and two boys play in the water.

The family are then seen sat aboard a boat that is towing a smaller boat. In the smaller boat sit two men dressed in Army officers uniforms. This is followed by a shot of a partially ruined or bomb damaged church (Possibly St Nicholas Church, Blakeney ?) and the family making their way down to a beach towards the water. A Second World War transit camp or army camp is seen as the camera moves across the coastal landscape and the family play on the beach. The film then follows a worm (?) emerging from a hole in a rock (?).

The final section shows a bomb damaged or ruined set of buildings (possibly a former Abbey or Cathedral?); the family ride in a boat on a river surrounded by small sail boats.