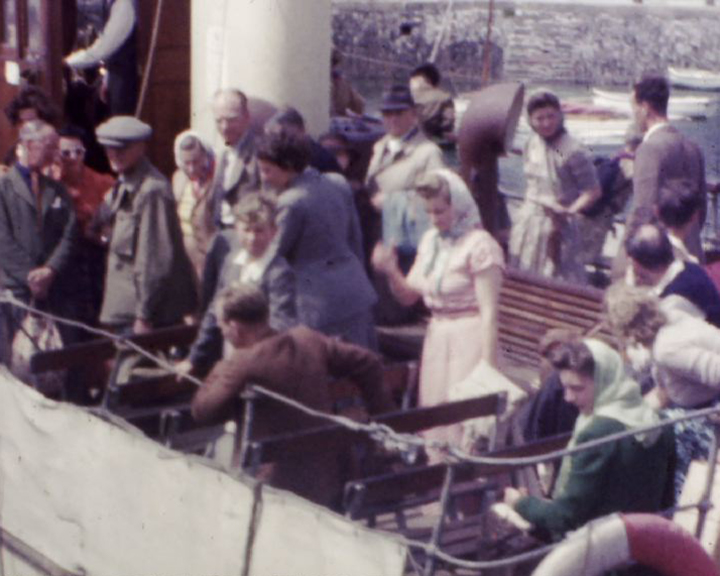 This film opens with the Corder family enjoying a day at the seaside swimming, surfing and exploring the surrounding countryside. The family are seen sittong on a windy cliff top by the sea. Several panoramas of the coastal landscape follow.

The film changes to colour and shows a young boy lying on the beach playing in the sand with a ball. Two older girls enter the shot having come out of the water holding a wooden bodyboard between them. This is followed by a view out to sea with several ships, boats on the water.

In the next part, the family board the chain ferry in a car (CEA 566). As the ferry gets underway the children watch the ships. On land, the family stop off at a hotel (?).

The family are then seen at the harbour. People disembark from a passenger boat and several panoramas of the harbour follow including views of the 'St Mawes' (?) Hotel and Cafe and the parade of shops and hotels next to a road. The family then picnic next to the harbour.

In the next black and white section, the family go for a walk in a village (?) They visit a church with a stone Celtic cross in a churchyard.

The film then returns to a view of several ships and naval vessels on the water. The car ferry passes the shot. Panoramas of the landscape follow (very bright, low contrast) along with shots of a bungalow.

Returning to colour film, scenes of a boating lake follow, with a boy rowing a boat on the lake. This is followed by shots of the family walking down the promenade outside the 'Promenade Hotel/Cafe', heading towards the beach to go for a swim. In the final colour section, the family are seen playing games on the beach and swimming in the sea.