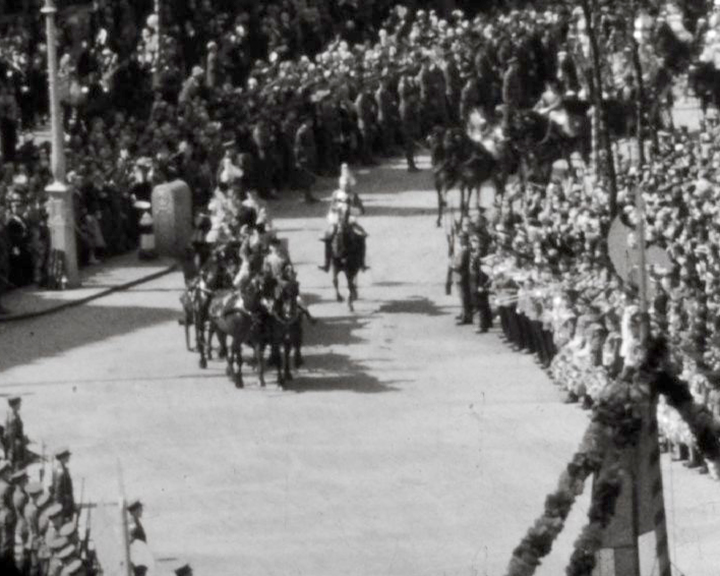 This film shows scenes of the Coronation celebrations for King George VI at St Paul's Cathedral, London. A procession of members of the Royal Household are seen moving down the Strand towards Fleet Street & St Paul's Cathedral, flanked by the Household Cavalry including the Duke and Duchess of Kent (Intertitle), followed by The Prince of Wales and Duke of Gloucester (Intertitle) in horse drawn carriages.

The camera stops on Park Lane outside the Dorchester Hotel adorned with flags.

The next section shows a long moving shot from the road opposite the buildings of the Old Knightsbridge Foot-Guard Barracks adorned with union flags (facing Hyde Park), moving towards central Knightsbridge. Buses and traffic fill the street.

This section shows a wide view of Buckingham Palace and gates from the front, with traffic and cyclists in the street. The shot moves across the Queen Victoria Memorial to reveal the crowds of people sitting around the edges and lining the streets.

'In the Green Park'

In this section people are seen sitting on benches in the park and on the grass, whilst a traffic jam builds on the road up Constitution Hill (?) and around the Victoria Memorial.

This very short shot looks toward the Houses of Parliament / Victoria Tower (Big Ben) along Victoria Embankment. The River Thames is on the left.

This sequence shows a moving shot from Whitehall towards Parliament Square finishing on a close-up of Westminster Abbey.

A Shot of the Cenotaph (War Memorial) on Whitehall looking towards Trafalgar Square.

Filmed from a car, this section shows Admiralty Arch, Nelson's Column and the Sun Insurance building with signage facing the square, as well as uses, traffic and shots of the fountains.

‘All Kinds of vehicles where seen'

This sequence shows a family using a horse drawn cart (?) with their children in the back as buses and cars pass them in the busy street.

This sequence shows busy traffic in The Strand along with the church of St Martin-in-the-Fields, adjacent to Trafalgar Square.

This section shows a banner hanging down the front of a building (location unknown) depicting the new King George VI and his wife, accompanied by the words ‘Loyal Greetings form Kodak’s 4,000 British employees’.

This short sequence shows a shot of the outside of the Royal Courts of Justice, adorned by flags and decorations.

This shot is of a statue depicting a Griffin, the mascot for the City of London adorned in flags.

This section is taken from a car passing down Fleet Street and up Luggate Hill towards St Paul’s Cathedral. A policeman is in the road directing traffic - buses and cars move around him. Close-ups of St Paul’s Cathedral exterior follow.

This section shows the street adorned in flags and bunting

‘Views on the Embankment’

The car moves down the Embankment, filming the boats on the river - a glimpse of the top of the ‘OXO Tower’ on the South Bank can be seen in background over the boats.

This short section shows the front of Selfridges & Co. on Oxford Street, decorated with a statue of Britannia, a crown and the words God Save the King.

‘The day of the procession 8pm’

This section opens with a view from a building opposite St Clement Dane Church on the Strand. A family group watch and film the proceedings from a room in the building (possibly from the Courts of Justice building?). People line the streets outside watching the Coronation parade and military bands pass by.

The section is only a few seconds long and stops mid shot inside the room overlooking the street below.