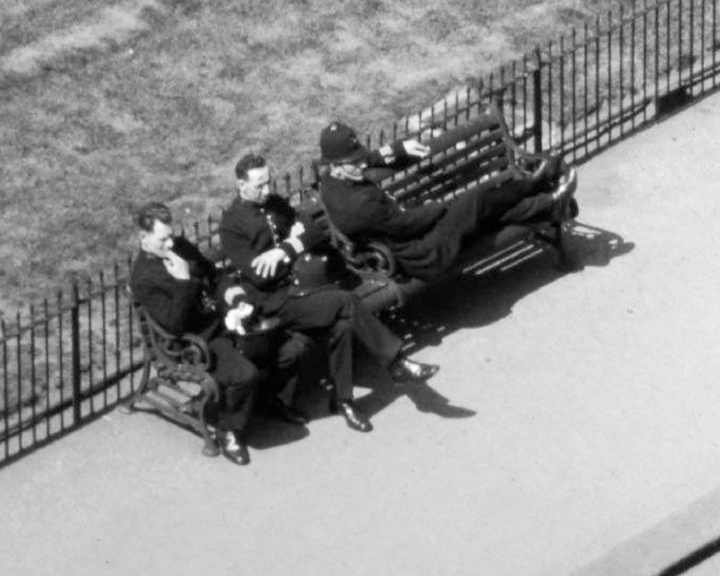 The film opens with scenes from a tour for the Silver Jubilee celebrations, in honour of King George V in 1935 between London and Harrow (?), following the completion of the church service in St Paul's Cathedral. Intertitle: 'The Crowd disperses' - Crowds of people line the streets outside St Paul's Cathedral, police officers try and move them on. Bunting, Union flags and decorations hang from lamp posts and buildings in honour of the event.

Intertitle: 'Some remain to listen to the cathedral service' - Crowds of people remain on the streets following the service. Litter is strewn everywhere on the street.

Intertitle: 'Dismissal of the police' - Three police officers in uniform sit on a bench talking. Followed by an empty interior shot of the inside of St Paul's Cathedral (West Portico entrance?). Several police vehicles are in a line with officers swarming around them ready to disperse. Others sit in a long line on benches or stand on parade, as seen from a first floor window.

Intertitle: 'Some scenes during our return journey' - From the car, the camera moves down Charing Cross Road/ Villiers Street where a group of Yeoman Warders/ Beefeaters from the Tower of London walk alongside the car. The car passes the Charing Cross Hotel. The Warders are dressed in full ceremonial attire. The car passes down Regent Street with the shops, buildings and street adorned in decorations and lights. The car turns down Oxford Street to see the shop front for John Lewis & Co. On the roof of Selfridges & Co. a statue of Britannia surrounded by bunting and decorations. In the next shot, two men are seen arguing, whilst another is talking to a policeman in the street (?), surrounded by a crowd of people watching. Police officers arrive in a police car bearing the royal crown for King George V and the letters M.P (Metropolitan Police).

Intertitle: 'Harrow's night celebrations - the torch procession assembling' - A procession of torchbearers are seen on parade marching in large numbers down a street at night, followed by shots of a bonfire burning brightly with fireworks overhead. Title: 'The end'